We’ve referred to lists in previous posts such as our Facebook Privacy And Your Family post recently and it appears that lists haven’t been quite as commonly used as they could have been.  Well, that was until Google Plus introduced their circles and people could easily see the benefit to categorising their friends or contacts.  After all, don’t we all have “friends” for different occasions?

And it would appear that Facebook noticed that this particular feature was proving popular as they have now decided to step up their promotions of Lists.

To start with Facebook already offer Lists.  Personally I use these lists for family, friends, acquaintances, work colleagues and a category I simply call “Others”.   Within my Others list you’ll find businesses that I’m interested in updates from that haven’t quite been persuaded to make the leap from running their version of a Facebook “page” which is in fact a profile designed for a human being masquerading as a company – but that’s a post we’ll share with you in a day or two.

And amongst those “Others” they’ll find if they check that they are blocked from viewing just about all of my photos (except profiles), most of my personal information and that they’re not allowed to post to my wall.  Does this sound like something that might work for you too?  Even if not to keep the possibility of strangers out – and let’s face it, none of us really know who or how many people are operating a Facebook profile in place of a page – you may decide that certain activities might be best out of sight of your work colleagues, your family or your friends?

So, over on the Facebook blog we were delighted to see a post on Improved Friend Lists which is based on three improvements;

We should point out at this point, that the Lists are optional so if you prefer to share everything with everybody you don’t need to read on…

If however you do want greater control of your privacy, here’s a little more detail on the improvements listed above;

Initially these will be offered for Work, School, Family & City all of which are pretty much self explanatory.  You’ll have the option to add or remove people as appropriate, ideal for those people who prefer not to include their workplace on their profile for example and wouldn’t therefore be ordinarily suggested by Facebook.

You may well have 300 friends on Facebook but if you actually look at your friend list in detail you’ll probably find you talk to about 10% of these on a regular basis – and by that we mean once a week or so?  Some people you’ll speak to every day, others a few times a month with others yet again quite possibly only to wish each other a Happy Birthday.

So you have the option to set up lists based on criteria such as:

Close Friends will give you all the important details such as photos, news, status updates, etc.  If you really can’t bear to miss a thing you can even arrange to be notified whenever they update.

Acquaintances are those people you may have been close to when you worked or went to school together but aren’t actively involved with on a daily basis.  For these people you’ll see the major events such as a relationship change or change of home city.

Other Lists are those lists of people you may wish to grant partial access to your profile only.  You can choose to allow them post to your wall or not, view your photos or not, send you messages or not, etc.

Facebook set up your Smart Lists based on significant similarities but the second group of lists is your choice.  You name, you select the people, you select their access to your profile.  Friends on these lists will be able to see those people you have placed on their list in order to ensure that if you’ve grouped them together for a reason e.g. to organise the school reunion, that they can all know who else has access to this information.

And if you’re like me and have Facebook Friend Lists already in place those lists will still stand so no need to worry about having to go back in to update them all right now.

If you’ve got 10 ex-colleagues from your last company in a particular group and receive a new friend request (or indeed request a friend), if this new person also lists this company as a place of employment Facebook will pick up on this and suggest that they’re suitable for this list.  Again, it’s your decision as to whether you add them or not as it’s merely a suggestion.

With all of these new Facebook Lists comes the option to view your newsfeed in a different manner i.e. you can now choose to view the newsfeed from a particular list only if you wish – quite handy for those days when Facebook time is brief. 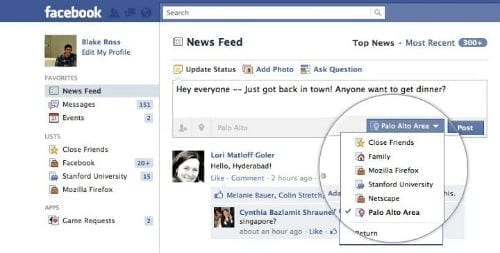 So, this has been a long post and Facebook Lists aren’t exactly a new feature but we feel that they are an important feature that people really should use to better protect their privacy and that of their family.  So we’ve a final summary of why you really should get those Lists in order:

So, as we arrive at the end of the post feel free to ask us about creating lists, protecting your privacy or any other of the many queries people have in relation to Facebook that they’ve meant to get around to but don’t quite know where to start. We’re not Facebook but if we don’t have the answer, we can certainly find it for you at TheMarketingShop.ie