Facebook – The Big News; Profiles, Timeline, Music, Films, The Past And The Future

Yes it’s a big title, but then again this is a BIG story!  In fact, it’s probably the biggest story since Facebook emerged and it’s going to change the way you interact socially for good, with a significant nod to the past too – even your pre-Facebook past if you like!

So, were you as impressed as we were?

This is THE feature that’s getting a huge thumbs up, even though it’s bound to lead to initial confusion.  Essentially the Timeline is the Story Of You!  Initially Facebook will work with the information it’s got, right back to the date you joined Facebook.  You however, will have the option to date and add a location to photos for example so that if they date back to last years summer holidays they’ll be placed further back in the Timeline than those that are dated for this year.  You can add photos or information relating to the days we didn’t even have Facebook and again they’ll be positioned in the correct chronological order and they can be accessed by scrolling down to the correct year and month.

You will have full editorial control, you can block sections and adjust your privacy settings (once we get to test we’ll post on the differences on this important area) so you get to control who sees particular parts of your personal history.  We see this becoming hugely popular as essentially with a little effort, Facebook are giving you the opportunity to create your own virtual autobiography!

The profile as we know it will change dramatically in layout with your profile picture plus a cover or feature image across the top and information listed below, not unlike a blog appearance in some respects: 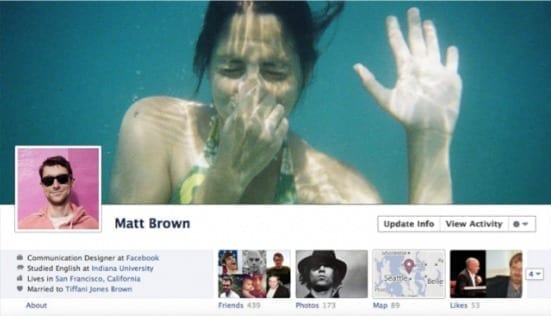 With us little over a year, the Like button has been phenomenally successful but the very word “like” was equally as limiting as its predecessor when you had to become a fan to access a page.  Verbs are to be included so essentially you could say “I read One Day” as in the book, or “I watched One Day” as in the movie instead of simply clicking “like”.

Best explained by video, apps are going to become simplified and one click will be sufficient authorisation.  A video demonstrates how these will appear in your Timeline:

The developments on the app front are quite significant, but we don’t want to be too technical on this front today.

Whether it’s Farmville, Scrabble, Mafia Wars or any other of the many social games Facebook’s 800 million (yes, it’s now that many!) users enjoy on a regular basis, one of the frustrations was the repeated requests from the game as to whether or not you wished to share your latest achievement on your facebook wall.  This will be no more, so for those who’ve found this to interrupt play you can now enjoy seamless social gaming.  You will be able to share news if you wish, but for both the user and their friends we’re sure this is going to be a welcome development.

Up to now the Facebook apps for phones were not particularly great.  They’ve been basic with limited options and quite a lot of content wasn’t available to you.  We’re now informed by Facebook that going forward, all apps will work across all mobiles.  As the numbers of people using a mobile device to access the web continue to rise, this should prove enormously popular amongst those of us who found the Facebook app quite the disappointment up to now.

An announcement on music had been expected for some time and now that it’s here the user can find new music, listen along with friends and more all through a number of music services that have signed up to Facebook, some of which however may not be available in all countries so we’ll know more on this front shortly.  See more information on how music will work on this video:

Netflix and Facebook have joined forces to offer users the opportunity to view movies through Facebook.  Currently, Netflix is not available in Ireland so this is one we may have access to in the future.

As your friends discover news articles through a series of media apps, they’ll appear in your ticker and you in turn will find more articles of interest or content which you in turn can enjoy and share.  As we all know that news breaks through social media these days, this integration of mainstream media channels into the social media sphere should prove interesting too.

And there’s the fact that if the news is now breaking via facebook apps, we might just be that little bit less inclined to stay tuned to twitter which has developed quite the reputation for it’s real-time breaking news?

All of these wonderful news features will dramatically change the way we use Facebook and the way our profiles and history appear.  In the main, it’s an exciting development so we look forward to testing it once it becomes available – currently it’s available in test mode to a limited group only.  We will however wait patiently and look forward to watching how these changes impact on brands, given that ads or businesses don’t appear to have featured in today’s F8 Conference at which the news was broken.

Facebook have raised the bar on Google, let’s see if Google Plus can come back with something equally impressive…